The February 2018 workshop blew my mind. It was amazing to see the chorus sing and move around.

Honestly, that not something I’ve ever seen before. It was only a brief moment where the choir memorized a short passage, and then performed Antti’s choreography along with it, but it was very cool. I wish we workshopped everything in the world of concert music. It’s such a rare experience to be able to hear a piece “on its feet” before it’s prepared for performance. 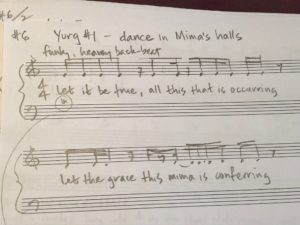 I was thrilled (felt like I was on the right track) when The Crossing read through the fragments of the first four movements in December 2017, and then the first nine movements in February 2018. I really needed the feedback from Dan and Donald, and from the singers and accompanist. I needed to get a sense from the room of what was working and what wasn’t. I have a general sense of being in the ballpark with the variety of musical language(s) in the piece, though I’m still trying to figure out what the boundaries of genre and style are. How to define the musical idioms of the characters and the story with these instruments. I’m still trying to figure out how much “popular” music has a place in this score, and how far out to expand the vocal techniques. As I said earlier, this is a group that is comfortable doing just about any vocal style, extended techniques, and so forth, and there might be moments in this score where unusual vocal timbres would be utilized to great effect. I think, for me, that’s more of a 2nd draft kind of discovery.

It’s always exciting to begin a new collaboration. I’ve known Donald since 1992, and Dan and Donald have known each other for a long time as well. The two of them had agreed to work on Aniara with The Crossing and Klockriketeatern before I was brought on board as the composer. In August of 2017 the three of us met at Dan’s home in Porvoo, Finland, along with the actors of Klockriketeatern and the Finnish design team. We read through the draft of the libretto then, and discussed the project in general. It was an amazing two-day immersion into the collaborative process, and it was wonderful meeting Dan for the first time.

Dan’s libretto, like Martinson’s poem, is presented in fragments. We are creating a series of snap-shots in approximately 20 individual movements. The structural fragmentation presents interesting challenges to us as we navigate the through line of this 90-minute work. While there are clearly linear events (space ship Aniara takes off, it veers off course, and so forth) the piece is not really about the story as much as is it is a meditation on our purpose. Put a community of people on a ship that’s headed nowhere for the remainder of their lives, and what/who are they? What do they want? Who do they become? How do they feel? In a way, we’re already there – traveling on this spaceship Earth; where are we really headed as a community? It’s heady, philosophical stuff, and I’m enjoying floating around in the questions Aniara poses.

Writing for The Crossing is a luxury. When Donald asked me if I wanted to work on this piece with him and Dan, I thought about it for maybe half a second and said “Yes!” Working on this piece is like preparing to make a meal, opening the refrigerator, and finding the perfect, most amazing ingredients. OK, that’s kind of a weird metaphor, but I enjoy cooking, and I like food, so maybe you might understand what I mean. The Crossing has a beautiful, other-worldly sound, and they’re loaded with talent and soul; there’s almost nothing I could conceive of that they can’t figure out how to do – so technique isn’t a consideration. This allows me to dream big, and dream of anything that drifts into my consciousness, or subconscious for that matter. As I’ve been writing this piece, I’ve been listening to their magnificent recordings, and one of the things I’m struck by is how fearless they are as musicians. One of the most rewarding experiences in professional career was hearing them sing the premiere of my work (The Woman Where We Are Living – 2014). It is one of the most deeply personal pieces I’ve ever written, and the care and beauty with which they presented the premiere felt like a gift.

Aniara is currently scored for choir, 2 actors, dancer, and 4 instrumentalists. Everyone will be amplified, and we’ll be able to process all of the voices and instruments (with reverb, delay, distortion, etc.) The budget allowed for an instrumental quartet that would accompany the choir and actors. Donald, Dan and I began discussing the specifics of the instruments once I started writing music. The first choice was guitar because the opening movement is like a folk-song (musical excerpt?); Dan suggested that this might be a Kalevala tune (he sang one into my iPhone so I’d get the general idea) and the accompaniment would be like a drone, setting a nostalgic mood, recalling a memory of the beauty of where they had come from before the Earth (called Maa in our story) had been ravaged. So, the acoustic guitar came first. Later on, when I began writing the movement titled “Phototurb,” which is essentially about the nuclear bomb, I started wanting the grit and the drive of an electric guitar (with distortion, and perhaps even delay). After the guitar, we agreed on percussion, since Antti, our choreographer, has training in Beijing opera dance, and percussion is an integral element. Also, percussion can provide so many varied timbres and grooves that will drive the piece. Up till now, the percussion battery includes vibraphone, crotales, a make-shift drum kit, and some other hand percussion. In addition to the guitar and percussion, we wanted to add more lyrical, long-lined instruments, so we chose a string (cello) and a woodwind (clarinet), two of my favorite instruments. Clarinet was my first instrument after piano. Actually, to this point, I’ve solely written for bass clarinet, as that’s one of my favorite tone colors. Both instruments roughly cover the entire vocal range as well.

It’s hard to describe exactly what our adaptation of Aniara is as it relates to other works. The term for these kinds of pieces these days is “choral theatre,” though that’s hardly a well-established genre, and I don’t know that there are commonalities among the pieces that live in this interdisciplinary space. In Aniara, there are two actors who speak, sometimes with, sometimes without music being performed simultaneously. In our February 2018 workshop, we began exploring movement and dance by the choir, sometimes when they were silent, and sometimes when they were singing. It was thrilling and new (for me!). In the final production there will be costumes, projections, sound design, lighting, and so forth. There is clearly a story, and there is an over-arching journey that will last about 90-minutes. I have been relying on my experience as a musical dramatist who frequently works in the genre of musical theatre to envision scenes and fragments for this piece. I’ve been trying to think about song forms and dramatic structures that work well on stage; that add up to something larger than the individual movements and moments. Add to that the setting of the future and outer space, with the chorus as inhabitants aboard an enormous spacecraft – well, we’re just not in Kansas anymore.

I’d very much like to present a deep dive into a specific musical moment, but I’m hesitant to do so at this stage because I feel like I’m still figuring out the trajectory of the whole. I keep having this uneasy feeling that there’s going to be a moment when I realize, “Oh wait, I need to re-think everything from the start.” Hopefully that’s not actually true, but I know I won’t feel entirely comfortable with my work on the piece until I’ve written a draft of the score that takes us all the way through to the end. I tend to write in broad strokes at first, and then go back and refine and reshape. It helps me to see the forest rather than focusing on the trees. I’m hoping in the next few months to have a complete draft!